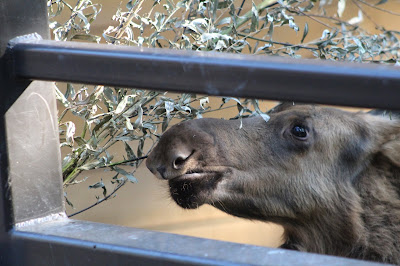 Before I could see the zoo’s new resident, I could hear him whining in the barn, hungry for breakfast. A few months earlier it belonged to his predecessor, whose annual antlers decorated the outer wall.

Although the Cheyenne Mountain Zoo has reopened with COVID limitations, one major benefit is the zoo’s institution of an 8 a.m. opening time, letting early guests watch their keepers open the zoo, and giving visitors the chance the catch the animals before they are normally used to people.

I beelined for the Rocky Mountain Wild; if I could see just one animal, it waited there. A rooster crowed as I arrived on the mountainside, a rooster whose name I later learned was Guy Fieri as he crowed into my face and right at my camera lens. He was kind enough to pose.

Zoo staff brought several tortoises up the path, although the tortoises took advantage of their freedom to begin grazing on the mountainside grasses. In the often-busy alley of restaurants, a peahen and one of its young drank gingerly from a puddle.

As I waited on the barn to open, one of the keepers asked me if I wanted to help her feed the river otters. How could I turn that down? A call from the keeper brought two of the three otters scurrying across the rocks. She placed hunks of meat on a multitool and the otters cleaned even the tiniest bend in the metal. It provided a close-up of their intimidating teeth and claws. Cute as they are, you won’t catch me troubling an otter.

Some of Rocky Mountain exhibits bore a nose-searing smell, in this case musk from Quilliam, the zoo’s male porcupine, who had been … active. The female porcupine in the same enclosure kept hazing him off. The male paces and anytime he got too close his exhibit-mate struck up an unfriendly growl.

Only one of the zoo’s three mountain lions stalked in the enclosure. One is too young for exhibit, a male kitten found abandoned on a road logging earlier this summer. The other adolescent mountain lion was also absent, but the one who pounced around more than made up for them. A bird chirped in the tree above the puma, and it leapt into the tree, only a screen atop the enclosure blocking it from a kill. He climbed with the speed of a housecat, 10 feet up in a leap. The Mexican wolves were also full of energy, daring around their space in sprints and jumps.

But this morning's main course was moose, the youngest I was likely to see anywhere.  The moose had no name then, but he now goes by Akta. At 11 weeks, he would not have survived in the wild having lost his mother at five weeks.

The moose enclosure had been empty since late spring, when Atka's famed predecessor, Tahoma, was euthanized after a short illness. One of the keepers told he went downhill quickly. I attended a Tahoma keeper talk in February, and he seemed mellow but comfortable.

Akta was found in Alaska near his late mother and immediately take in by an Alaskan zoo. Cheyenne Mountain had a vacuum, and the little moose who had no shot at a wild life would join the Rocky Mountain Wild exhibit. For the moment, the little guy is all appetite, moving from keeper to branch on spindly legs.

He stays in the barn at night, as a defenseless moose calf could draw the wild predators inhabiting the forests of Cheyenne Mountain outside the zoo. He’s restricted to a smaller portion of the moose enclosure while learning to navigate the grounds. Those stilt-like legs need seasoning. The best part of the membership is I can go back anytime and watch the moose grow. In a year’s time, he will be huge, and the turkeys who share his pen won’t be so bold.