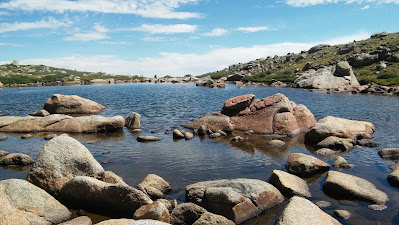 Five miles into the hike up to Rosalie Peak, I knew a 14’er this year was out of the question. Mt. Sniktau inflated my expectations but didn’t portray the long, grueling reality of the trails leading to 14’er peaks.

It all seemed simpler at the Deer Creek trailhead, where the mountain creek rushed out into the national forest. The creek and trail were tied together for miles, the fast-moving waters descending over waterfall after waterfall. Few dropped more than a foot or two, but the combined sound of dozens of tiny cataracts filled the forest with noise. We passed numerous dispersed campsites up the trail, which accounted for many of the larger groups headed up the trail.

Karen said in the past, she often shared this trail only with people headed to fish at Roosevelt Lakes. Today we would see much bigger crowds. I had no quibbles with them; you had to earn the views on trails like these, so anyone who hiked to the top had done just that.

Soon the trees thinned and grew in stumpier groves. The blue sky broke through. We could look behind us (south) through row after row of Rocky Mountain peaks, with Pikes Peak even rising above them all at the southern end of the row. The stops grew more frequent. There was no shame in stopping. The air thinned out, and the heartrate needed a chance to slow down.

The chipmunks continued their angry chirps. The marmots and pikas started warning the tribes that round after round of hikers would be passing through their domain. The saddle between Rosalie and a second peak looked close from the moment we entered the switchbacks that started near the treeline.

Close doesn’t count in hiking; close only tantalizes and delivers false promises. Here we entered a new round of difficulty from the thinning air and steeper grades up the trail. Here I know a 14’er would be a 2021 project. The pines suddenly looked stunted. Fields of blooming wildflowers spread down the mountain’s flanks. My poor physical condition could not be hidden up here. There was no way I could get ready for such height before the first snows arrived -at 14,000 feet, the first dustings start in early September.

At the saddle, the barren flanks of Rosalie Peak rose 1,000 feet through paths of scree and lichen. WHile it seemed barren, we stayed on the trail to avoid damaging the cryptobiotic soils that brought green to this tundra, that took decades to produce plants of any size.

Here we decided on another feature of the alpine meadow - the Roosevelt Lakes, which lie within the Mount Evans Wilderness even though Evans and Mt. Bierstadt stood shaded in blue due to distance. Straight down from the saddle, we could hit Roosevelt Lakes in less than a mile. To the other side of the saddle rose the Pegmatite Points, a colorful collection of rock that forms Rosalie’s east ridge.

For a while we seemed to amble through an endless field of boulders and grasses. Then came a dash of deep blue hidden by the boulders. From our angle, we had to be nearly on top of the Roosevelt Lakes to see them.

Unlike other tarns, these lakes were lightly populated, with plenty of rocks for picnicking and places for anglers to cast for the trout quick to dart to the lakes’ darker blue waters. We found some boulders where I could drop my feet into the water, that cool mountain water that soothes any pain. The therapeutic cold would linger almost till we returned to the saddle.

Karen is always good for trail snacks, so we relaxed at this placid point while the trout ventured ever closer. People hiking with their dogs approached the shore, while most dogs bounded straight into the refreshing lake.

But times like these cannot long long. We had a return trip to contemplate. With five miles and almost 3,000 feet down, my feet were in for a fresh pounding. It wasn’t my shoes, just being unaccustomed to the distance and the terrain. For too many stretches, the path was basically crushed, jagged rock. I almost fell a few times as the loose rock gave way.

Was it 10 miles, 11.5 miles or 12 miles? Different sites measured the combination of trails in different amounts. After the beating my feet took from the rocks and the way the rest of me felt, I lean toward 12 and would accept 11.5.

A naproxen and a chocolate milk improved my condition, as did bottle after bottle of spring water. Every once in a while, my feet felt a chill, a phantom sensation from the cold of Roosevelt Lakes. 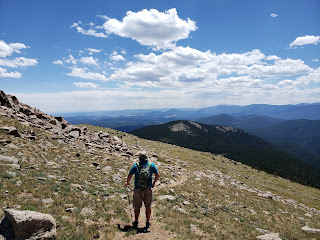 Posted by Bill Melville at 6:09 PM