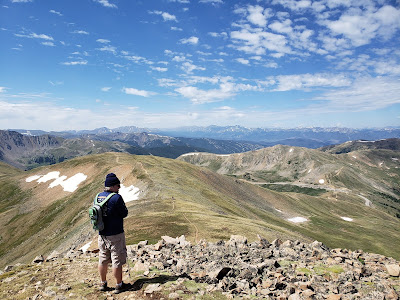 All summits are false – it’s a good attitude to adopt on a short, steep hike.

On a July morning, some of the worst parking jobs anyone might ever see congregated in the unstriped lot along Loveland Pass. It was spectacular – another 6-8 cars could have fit had anyone bothered to line up. We waited for one early-morning photographer to leave and nabbed a parking spot so we couldd head from the pass up to Mt. Sniktau, which tops out at 13,240 feet above sea level.

Since Karen proposed it as a goal for summer hiking, I wanted to see know what that 13’er elevation felt like. Our training hikes were steep and longer but at lower elevations. Now it was time to test the short but steep 13'er trail. 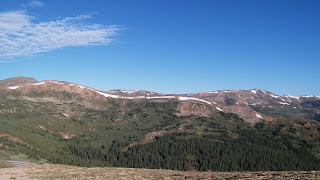 This was the morning, here we on the old route across the Central Rockies. With Loveland Pass the main alternative for hazardous cargo to travel around the Eisenhower Tunnel on I-70, trucks rumbled up the pass almost constantly. They had no choice but the wind along the hairpin turns to bypass the tunnel.

People snapped pictures all around the area. The Loveland Pass sign was popular. Until I accomplished something, I wanted nothing of posing with signs along the pass. From the pass, the trail started on an unrelenting uphill climb with false summit after false summit.

Wildflowers dotted the tundra, and we stayed tight on the trail to avoid upsetting the delicate tundra soils and grasses, which can take years to grow to sub-alpine heights due to the short season. One wrong footstep, and you’ve smashed grasses that might not recover in your lifetime. 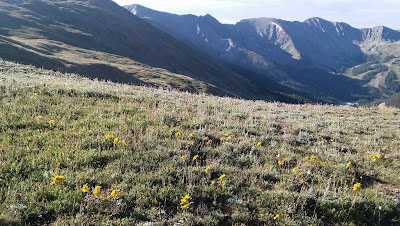 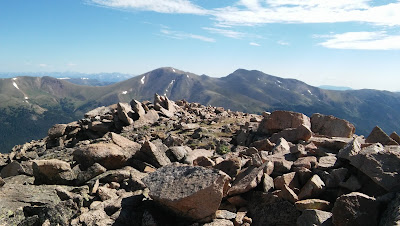 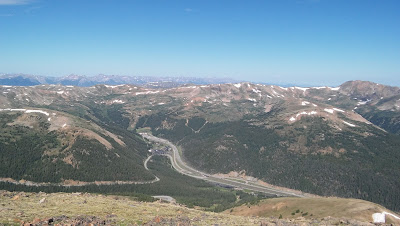 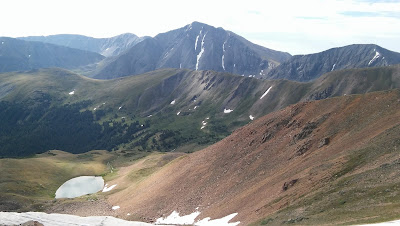 We started above the treeline and the brief combination of spring and summer bloomed across the Sniktau trail. There would be no breaks due to flat spots on this climb. Several stops for a sip of water and to slow our heart rates, but this trail was short and full of obstacles even when it descended. When the wildflowers stopped, paths through the fields of scree started including the one that led to Sniktau’s peak.

Every spot that seemed to lead to a flat spot led to another summit. But every few hundred feet along the trail offered better views of the area around Loveland Pass. Ski resorts rose from the mountainsides. Interstate 70 grew thinner as we rose but never disappeared. Karen’s car was visible most of the trip, as was a second lot a few hundred feet down the road. 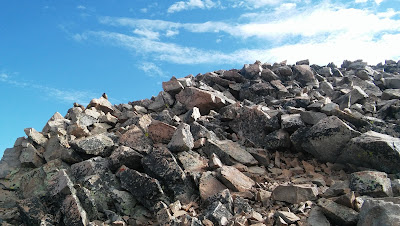 At the last false summit before a journey down a saddle to Sniktau’s true peak, the yellow-bellied marmots began to warn their extended family that people walked through their rocky labyrinth. They undoubtedly had extensive burrows below the boulder piles.

Marmots weren’t the only ones – chipmunks uttered their little electric chirps regularly. Pikas broke in with a series of high-pitched noise as they scurried around the scree topping Sniktau and its slopes. As the elevation grew, the chipmunks gave way to marmots, who gave way to pikas living at the 13’er’s peak. Down from the saddle, we could see our destination, or so we hoped. The air was thin and that slowed down the trip, but it was not as punishing as I expected. One hiker coming back from the true peak said he found a geologic survey marker although weather had scrubbed all writing off it.

The last stretch was rocky but bearable, as the path through the boulder field was well-defined and challenging due to its elevation. Below us on the trail, there were signs of a couple meltdown that only hikes can cause. Soon enough they reached the top and elation at the accomplishment took over. So here we were, atop the boulders that top Mt. Sniktau, with five of new closest friends looking out across the Rockies. Yes, it was a two-mile hike. But there they were, on the summit of a 13’er, surrounded by a handful of 14’ers popular with Denver hikers that I hoped might be the next step.

The ascent that proved so harsh hours earlier did not grow easier on the way down. My feet slid in gravel and moving sideways across the path became a necessity. Soon enough we were down at Loveland Pass again the secrets of the Sniktau ascent hidden by rolls of false summits.

Another generation of gawkers gathered around the signs. Would-be hiker headed up the trail, likely to turn around long before they hit the first boulder field and sent the marmots squealing. We had victory calzones to eat back in Arvada, and the satisfaction of a morning high above Loveland Pass. 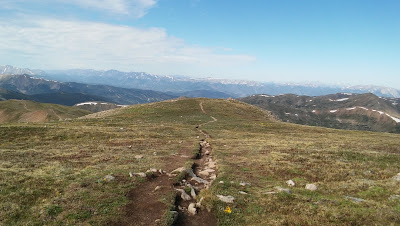 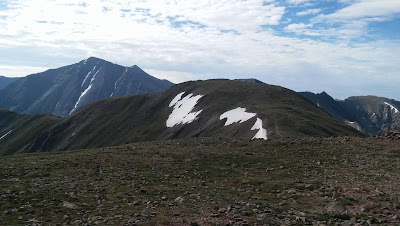