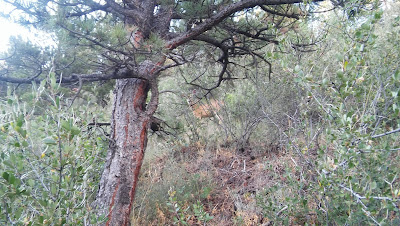 I should have grown tired of mule deer already. I see them in the yard, the alley, along the highway, sometimes just grazing fearlessly feet from rushing traffic.

Fortunately they always arrive at a fresh angle. On the flanks of Mt. Falcon, the mule deer seemed to know intuitively how to show themselves best. On the Mt. Falcon trails, the deer came above us on a switchback. Two young males, their first set of spiky antlers covered in velvet. The distance warded off their fears. Their elevation advantage meant they did not flee. They could sate their curiosity in us, and we could watch them graze between staring us down.

But there they stood, two mule deer on a bench of land above us. Tim and I were grateful for the encounter. Those memories stick with a hike. It felt like we could have watched them for an hour. A few minutes and the time arrived for us to move up the trail.

Mt. Falcon’s eastern trailheads have a saving grace for hikers – a 1.7-mile spur trail for hikers only. We would not see how important the difference was until miles past the junction with the main trail up the mountain.

The hiking-only trail also supplied beautiful view of Red Rocks. The amphitheater cut from its namesake stone was also open as a park when not hosting concerts. From the south, Red Rocks at first looked like are series of giant jagged stones driven into the Colorado earth. Somehow, they hid a stage and seating for thousands.

There might be no greater joke sign on Colorado trails than the one about mountain bikers yielding to hikers. That doesn’t work. It’s easier for hikers to let them go, since they are going to go anyway in most cases. Most are polite about the right-of-way ceded to them. As it goes in this life, the jerks get remembered. From the junction, the trail grew increasingly steep. There were almost no breaks, just a continued inkling and switchbacks breaking in and out of the forest.

We hiked as far as a pavilion where the mountain flattened out. Heading down from here, we were guaranteed 5-plus miles on the mountain.

People flowed in both directions. The breeze at the pavilion made it a hard place to leave, even if social distancing made it an easy spot for two people to monopolize. But we did, and why not? We would find our path back to the trailhead more hospitable. We moved quickly on the downhill, as inclement weather seemed ready to creep in. The crumbly rock of the rock was less an impediment in this direction, as we had sometimes struggled heading up. If we could time our breaks to coincide with groups of passing bikers, it helped.

Closer to the trailhead the obstacles grew. People milled around with little kids, and mountain bikers descending quickly really didn’t care. I know that isn’t true of bikers, but it was true of too many this morning.

Cars were parked for nearly a mile out onto the road, as the trailhead filled shortly after we arrived at 6:30. Mt. Falcon still loomed to the west until we reached the pass between the last group of mountains to its east. 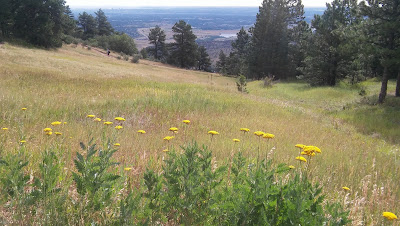 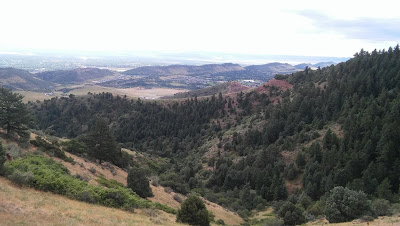 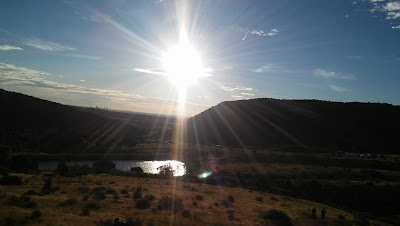