Under the Sawatch, under the stars

Leaving Colorado Springs, the haze would not go away, not with forest fire plumes rising across the state. When we reached the Sawatch, would it hold? The skies would not be perfectly clear around the state’s highest peaks, but it would be clear enough past Twin Lakes.

Even in peak summer, Thursday held camping promise in the Sawatch Range among Colorado’s highest peaks. There were too many campgrounds between Twin Lakes and the road to Independence Pass for us to strike out on a campsite. If all else failed, there was camping along Twin Lakes, albeit on a hill without a hint of foliage to cut the fierce alpine winds.

We marked out a few as the road ascended from the village of Twin Lakes, a cluster of buildings where people stopped for pictures of the Sawatch Range, home to Colorado’s tallest peaks. One was full, but another held promise, with a lot of empty sites off the road. More options arose past the Lost Gulch trailhead.

The debate over campsites ended as soon as we rolled into Twin Peaks, perhaps the most loaded name of any campground on this stretch. But the name did not lie. Mountains soared on either side of the campground, tall peaks that barreled upward past the treeline. Every patch of the campground was scenic.

The sites sat on a bluff among a roaring river whose name lied. Lake Creek was full of glacial boulders and rolled over several cataracts with a whitewater flow, the rushing waters hurrying off to Twin Lakes. 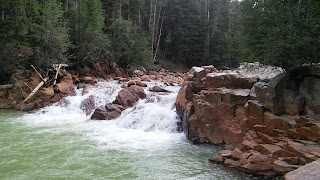 We picked a site, paid and set up camp. The sites were huge and wooded, affording easy privacy. We had 20-30 feet between us and the sites around our loop of the campground. We walked down to the creek, a series of paths winding on the floodplain below the cliffs. There was plenty to explore and no one around.

Even with water down in large stretches, the creek had a dangerous look thanks to many drops and swift-moving waters. As night and cold crept in, the smoke moved east, and the skies began to open up. We mostly just hung around camp and talked before it was time to call it a day.

At midnight, after every wind touching the tent signaled the presence of a black bear, lynx or mountain lion eyeing me up for dinner, I crawled out to sit. The Milky Way delivered – the fire haze moved along, and the banded arms of the galaxy emerged from the stars. It was magnificent.

A few hours later, I did the same, and the sky seemed even clearer. Even in a fire emergency, the skies could show their full nighttime beauty.

Morning came. As with every camping trip, I reached a point when I had to move around because the cold air, the cold that those unfamiliar with camping never knew, had hugged me too long. Indian blankets and winter gear ran out their usefulness. In mid-August, I ran up against a 40-degree night.

We tore down and headed out, stopping in Twin Lakes for pictures, as the tiny town beckoned everyone to capture its summer beauty.

There was a “road closed” sign where we needed to turn. Hagerman Pass was closed from secondary impact of the forest fires and unexpected traffic tackling its unpaved heights.

The fires further west had led all sorts of fools to resort to Google maps alternatives. Scores of people crossed the Sawatch Range on unpaved passes, roads only suited for high-clearance vehicles and sometimes not wide enough for two cars. Nothing like putting yourself into peril because you listened to an app and didn't check reality.

But all those inappropriate trips over Hagerman Pass forced the Forest Service to shut the road. We reached another series of trailheads west of Turquoise Lake, a jagged mountain reservoir, and found cars spilling out of parking lots onto the roads. EVery trailhead was packed and our hopes of a Sawatch hike sunk quickly.

We backtracked to the National Fish Hatchery outside Leadville, nexus for several mountain trails. But the one touted on hiking websites had a trailhead we could not find. At that point it seemed this was not our day for hiking.

But I had always wanted to visit the hatchery and its massive ponds delivered. Scores of tiny trout swam over each other in the hatchery ponds. Eventually they would be trucked to rivers and lakes across the Mountain West, restoring native stocks where they could.

The buildings are stately, harkening to the early 20th century when government buildings could still show style. A series of cottages for hatchery staff sat in a line at the edge of the forest.

Before leaving the hatchery, we spotted a large white van with a cat sitting in the front seat. Even with windows down, he made no effort to escape, as 99 percent of cats would. His owner came by - she toured the country in the van, and the cat had logged almost 30,000 miles with her. That's a dedicated pet.

At least there was Leadville. It doesn’t take long to wander the nation’s highest incorporated town, where the sun beats down with unexpected intensity and breaths don’t always come easily.

But Leadville has the advantage of sturdy old buildings and a few tasty lunch spots. A burger joint on the south end of town checked all the boxes for a quick lunch before crossing the passes back to the Springs.

Posted by Bill Melville at 3:35 PM