Not every park in the Colorado system demands repeat visits, but Roxborough State Park is mostly a hikers park, and there are always new challenges on its slopes. 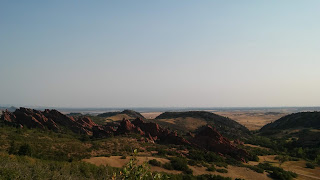 My friend Karen and I decided on the Carpenter Peak trail, which leads to the highest point in the park.

While a 7,166 summit might not seem impressive to those climbing 14’ers, Carpenter Peak is a quintessential Front Range hike, with plenty of challenging inclines and narrow passages.

The 6.4-mile roundtrip started with a series of steep switchbacks that traversed different types of forest.

The red rock slabs at the center of the park grew smaller as we ascended. That red rock is the connective tissue of the Front Range, from Garden of the Gods to the Red Rocks Amphitheatre to the paler chunks of angled rock that form Boulder’s Flatiron formations. The chunk in Roxborough are just as special, even if the park boundary ends and expensive houses push against them.

On my last Roxborough hike, the trails were packed with icy snow and passage required hiking poles or spikes. This Sunday saw the temperature headed into the 90s, and much of the Carpenter Peak trail had light vegetation and little shade of note.

Several miles in, the trail entered a pine forest and left the hills covered in chest-high trees. The temperature grew more comfortabl. The peak was often in sight from the trail. That alone could propel me along.

Near the end the trail grows narrow, with room for one single-file line. There were few places to step off the trail with the dropoff in some places (not hundreds of feet, but I don’t want to fall off any drop) and steep inclines along the switchbacks. The trail to the top is a short spur. Trails continue outside Roxborough into the adjacent Pike National Forest. Other trails extend into Douglas County’s system and Waterton Canyon.

It’s worth winding through the boulders atop Carpenter Peak to find one for your party. The peak is placid, especially at the hour we reached the top. People were not sitting next to each other; the closest group was maybe 20 feet away and had their own views of Denver skyline through the forest fire haze. 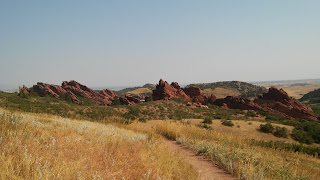 We descended rapidly, with me babbling about how much I enjoyed the hike the whole way. I had no right feeling so good at the end of a 6.4-mile hike with significant elevation change. In a hike near the treeline, I would have huffed and puffed. Here we moved steadily, and I rarely held us up.

The other observation was the number of people headed up the trail. Temperatures soared into the mid-90s and we received a mild respite from the poor air quality induced by Colorado’s raging wildfires. At 11 a.m., the heat was becoming oppressive. People pressed up the trail with limited water supplies, no hats and little indication they thought out this hike.

But we were done, having sped up and down Carpenter Peak, our summer of hikes in the central Rockies making one on the Front Range a much more pleasant proposition.

Posted by Bill Melville at 5:56 PM