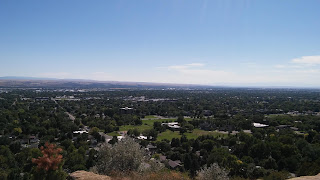 The thought was in my head all morning – you have the time to make it to Billings. Montana was too close to my stops in northern Wyoming and the Bighorn Basin.  It weighed too heavily.

I needed that taste of Montana. Sure, the Bighorn Canyon park road crosses into Montana just before the Devil’s Canyon Overlook, but I needed a bigger taste.

I could reach Billings in less than 90 minutes. I saw people for pictures posing in front of the state line marker and set off north.

Montana has more scenic cities than Billings. It just does. Few towns can compete with the peaks that hem Missoula or the beauty of the broad Gallatin Valley that frames Bozeman. But Billings has its soaring rimrocks and a big-city charm that’s welcome after days around the sparsely populated lands south. It’s not only the largest town in Montana, but the largest town in a 500-mile radius.

I could roam for a restaurant but decided to stick with downtown and started with one I knew. The Montana Brewing Company had open seats at the bar.

Having only had snack crackers and water all morning, the menu was a welcome sight. They recently tapped their summer seasonal huckleberry wheat, a fruit beer I always chased whenever this far north. Upon first taste, I already knew I needed a second pint. Montana’s original brewpub has stuck to its guns, only selling to-go beer in growlers for its 26-year run. I had to leave with a growler of huckleberry wheat.

A brief stop on Billings Rimrocks must accompany any visit. The Yellowstone River carved these imposing cliffs over millions of years.

While not the mountains looming over Missoula or Bozeman, the Rimrocks give Billings a unique flair. Plus, it’s a always one of the state’s great spots for a picnic, which allows you to look out onto the Bighorn, Absoraka and Beartooth ranges.

On this Sunday it was too steamy or a picnic. I stopped at City Brew for coffee, the voice on the drive-thru box double-checking that I actually wanted hot coffee on an afternoon when Billings hit triple digits. I did, and they supplied a good cup of it. Down the road I ran into City Vineyard, a restaurant and retail alcohol establishment. I loaded up on Montana libations to hold me over during the next few months. The staff could not have been nicer, even helping me to carry the beer out. I crossed several Billings neighborhoods to return to the interstate.

At Laurel I headed south again. I loitered a bit at the Yellowstone, the great river pushing tubers and kayakers down toward Billings. Someday I’d like to paddle part of that river, maybe drop a fishing line in hopes of landing a trout. Someday that change might come.

On this day, I was headed back to Lovell. The drive from Billings to Lovell crosses the mostly flat northern exit from the Bighorn Valley.

There was only one stop I wanted to make. Edgar was a few dozen houses, a post office and a tavern. Years ago I had stopped at the post office at the end of the gravel road east to Pryor, the Crow Reservation and the former house of Plenty Coups, the Crow’s last traditional chief. It was a cold, snowy day and the road felt treacherous.

Today it was dry, and the bar was packed, too packed for me in a pandemic. I had my taste of Billings, but I can’t go to Montana without stealing a moment in a small town or two.

Posted by Bill Melville at 9:29 PM