Atop the Snowy Range (Moose before hiking)

Driving the Snowy Range a day earlier, I stopped at a fishing overlook in the Medicine Bow National Forest, immediately declaring it prime moose habitat. At 7 a.m. the next morning the deep brown coat of a cow moose validated that decision.

Wildlife had already been thick in the hour before the sun crested the range. I had seen herds of pronghorns, mule deer and even magpies flocking as the sun climbed above the Snowy Range. When I flashed the camera, they turned their white rumps at me and sprinted away. I can’t blame them but won’t share those pics. Disrespectful pronghorn don’t deserve exposure.

That morning, as Saratoga’s bars rested before the next round of tourists and locals drank towards a clash, I headed back into the Snowy Range. As I pulled into the fishing area I visited the day before, the reward was immediately.

There she stood, trying to graze 100 feet out in the system of creeks. I was no threat, but I could hear the moose warbling at a distance of 100 yards. She was clearly not pleased with the intrusion of a drone. She warbled, and the irritation was unmistakable. But at least she was far enough away I knew I had not caused it. The drone operator offered nothing but an eye-fucking till I mentioned I targeted this marsh as moose habitat the day before. He seemed to realize anyone out at this hour had the same goal as him.

“There are two bulls just a bit up the road.” Whether he was eager to see me leave or not, he was not lying about the bulls.

I drove a bit wondering whether it would prove true, but one greedily chewed foliage in a creek on the roadside. So I started searching. The hardcore photographer tracking them gave up the moose, who were somewhat camouflaged by the marshy plants. Then their bulky brown flanks caught the sunrise, and they were exposed. One bull ate hungrily, while the other hung back in the pines.

Suddenly the bull in the marsh strode out, stepping right up to the bull in the pines. He began sniffing his grazing friend’s snout, while the other bull barely moved. I wondered if they might fight. Both had velvety antlers, too soon for them to lock antlers and fight for mating supremacy, but the moments had an intensity to them.

In the end, the larger moose backed off, and they both began a slow stride deeper into the woods. They inadvertently proved my theory that a creature as big as a bull moose could move 20 feet deep into the woods and be completely hidden. The other photographer pursued them; I let him have exclusives of whatever shots no one else would ever see. A half-hour of moose viewing, and I was set. There was no reason to pursue any other pursuits in the Snowy Range. 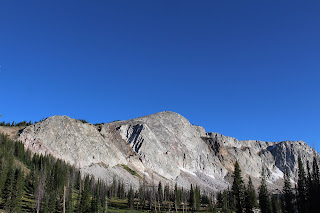 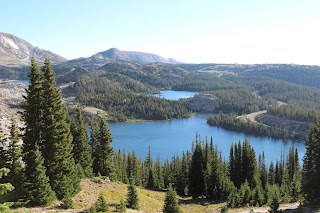 But I had to continue with my hiking plans. The sun Medicine Bow Peak, the shining rock face at the center of the Snowy Range. People circled for a good spot. I circled once and drove 1/8th -mile west to the next trailhead, where three cars sat in a lot for 20. No one circled here. It was a small addition to my Medicine Bow Peak hike, and I didn’t mind. When I returned it would be overflowing, with cars parked along the road the entire way.

The Lake Marie West Trailhead was quiet despite the pack of cars. I started up and had no one anywhere near for a mile or more. The route immediately ascended a series of switchbacks flashing amazing views of the lakes along the road and below the peaks. I strode through fields of yellow wildflowers that felt freshly sprouted on either side of the trail. I felt the altitude but the switch-backing trail prodded me to keep moving.

The first mile or more passed quickly. If I stopped, it was mainly to gawk at the natural beauty of Medicine Bow Peak and the surrounding mountains. Everyone passing on the trail was friendly. After those first switchbacks took me high above Lake Marie and the other tarns, the trail swung into its first round of debris fields.

The trail leveled out onto an alpine plain on the approach to Medicine Bow Peak. The northern edge of the Snowy Range was finally visible, with fresh pine-studded peaks and another round of pristine lakes. This island range had no limit to its natural bounty.

Despite hiking alone, I never felt alone, not with the chips and chattering from the rocks. The pikas grew fearless at these elevations. Some darted below my feet, some ventured just in front of me. If I did not threaten them, the season was too short for them to care about hikers.

Grasses and boulder fields continued past a summit that was not Medicine Bow Peak. And fire watch cabin was barely recognizable among the other boulder piles atop the mountain.

Shortly past the sign that declared Medicine Bow Peak, I decided to turn around. Summiting peaks doesn’t mean much by one’s lonesome, and I had stumbled through my share of scree.

On the way down, I had to skid and amble through fields that barely registered when heading up the trail. The quiet yellow wildflowers on the way up now hummed with the buzzes from thousands of honeybees. Not a single bee veered away from the flowers to assail a hiker. Their mission was clear, as clear as the pika building bouquets for the winter.

The bottom came quickly enough. The staggering views remained. Snowfall might grind on the Snowy Range before I could traverse its tallest peaks again, but I had every faith the pikas and marmots would emerge in the late-season spring.